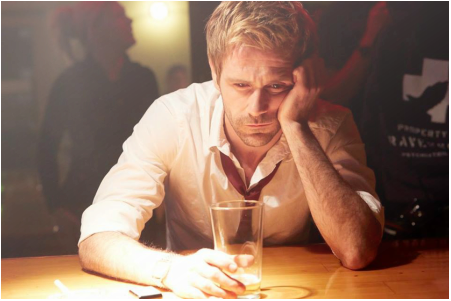 Sometimes I lose sight of what I'm feeling when I'm in the moment. Not only the moment of "being" as it is happening, but the moment of coexisting. To explain better, I will pose an example:
Walking through the city street but not really feeling like you're walking, more like floating. It is almost as if time is passing you by and you no longer care to catch up to it. It's almost like the feeling you get when you're running a marathon or say, a mile, and your mind is so deeply focused on the road ahead of you that you get lost in it and as you pass by other people, animals, or just the trees around you, you become engulfed in tunnel vision. Sounds around you seem to disappear and noise gets muted. Like that very specific scene that is often used in movies where you see the main character standing there or sitting down--motionless, while everyone else around that individual is passing by quickly and time is progressing. I like to think about it as being stuck in time. Not in a loop, but just time itself. Frozen. Like somehow your inner clock stopped ticking, the hands stopped moving because the battery run out.

Like I'm sitting at the bar and because I am the only one sober it seems that everyone else around me is speeding. As soon as I step into the establishment I am overwhelmed by the aura around everyone, the setting is almost suffocating--the people around me emanate so much energy that it is tiring.

But after all, this post is filed under "Hate," so I suppose I should find a link here soon, a way to express how this feeling of numbness ties into the "hate" part of it.

I regress, I need not explain how it ties to it.

All I need to say is that I don't hate it.

​Make of that what you will.