“He who believes that the past cannot be changed has not yet written his memoirs.”

A little bit on the following excerpt: this short written piece is unfinished and will later on turn into a full short story. This story is about friendship and will contain elements of a memoir in it because I started it as an assignment for one of my classes, however, it is to be noted that all events that follow are true and all names have not, for the sake of me making it more authentic, changed in any way whatsoever.

Thank you.
Friendship, Alcohol, and Superheroes

Ohhh… Alright… read the speech bubble on the 1964 painting within the picture frame. The painting consisted of a woman with short red hair. She held the handset from one of those old rotary dial telephones to her right ear and had a troubled gaze in her eyes. Her distress was carried down from her curved eyebrows to her upturned nose. She wasn’t crying, but you could tell she was about to. None of this mattered to me four years ago when I held it in my hands for the first time while sitting in the passenger’s seat of Veronica’s car, not even the fact that it had been stolen. The interesting thing that I couldn’t stop thinking about was that the color technique used on it was the Ben Day dot technique. Back in the 1840’s a man by the name Benjamin Day, an illustrator and printer, came up with the idea of taking the primary printing colors (cyan, magenta, yellow and black) and overlapping them together to come up with new secondary colors. Later on this would become the ideal way to print colors, and while I sat in the car holding the picture frame I couldn’t stop staring at the tiny dots that decorated the woman’s face and background. I felt like I was holding an Andy Warhol painting and that my hands weren’t worthy of it. This had caught my attention the first time I’ve seen the frame, hanging on the wall at the college’s cafeteria next to the pool tables.

“I just think this is amazing, like old school comic books, you know?” I told Veronica.

Veronica and I had just become friends and while I didn’t study at the college yet, but chose to work as maintenance, she had already started pursuing her filmmaking degree. She wanted to make movies and I knew she’d be successful. She was very passionate about it; Veronica was the kind of girl that whenever she wanted to do something, she would do it, no matter what came her way. She was younger than me by two years but already knew what she wanted to do with her life. She was smart and funny, and her laugh was contagious. While I stared at the picture frame on the wall she held the pool stick to shoot and called to me to watch her.

“If you bend down to eye level it will be easier for you to shoot, Cisco,” Veronica said. Then she took a shot and made the striped ball in the corner pocket. She’s good at this, I thought. At that time I had played pool before but had no idea how to play good, I did it just for fun, but Veronica taught me a few tricks and I began to get better at it, which much later would become something I would have to do if I ever entered a bar with pool tables in it.

“You must play a lot, you’re kicking my ass,” I told her and then turned to see the painting once more. I heard her footsteps behind as she came towards me.

“That’s pretty cool, huh?” she said as she moved in to take a closer peek at the frame. “You really like it?”

“Yes,” I replied, “you don’t see stuff like this anymore. The comics I buy these days are all painted through the computer. God, I’ve always wanted to have something as cool as this.”

When I bought my first comic book at the Houston Airport back in May of ‘03—the day I moved to the US—I knew then that my life-long dream would be to create my own comic. I was 15 during the time and I daydreamed of having my character run around the pages alongside Spider-Man and Wolverine. I just knew I had to make it happen.

I turned to face her; her long, brown curly hair hung down past her shoulders as a pair of hazel eyes stared at me while a small smirk formed at the corners of her mouth. I should’ve known at that particular moment the mischief that was brewing inside Veronica’s mind, but oblivious to it I moved towards the pool table asking if it was my shot. We enjoyed playing pool and the more I played against Veronica the more tricks she taught me to the point that I started beating her at her own game. More than two weeks passed by and I had decided to grab something to eat at the cafeteria. I went there and grabbed something quick and easy and found a table where to sit. I began eating but something startled me; I dropped the fork down and stared around the cafeteria. I stood up and moved towards the pool tables. There was a specific room inside the cafeteria with no doors where the pool tables sat waiting for the next opponent. I hadn’t noticed it when I first walked in, but as I moved closer to where the pool table Veronica and I had played during the course of the semester I realized something was missing. The painting was gone. I never finished eating, I had lost my appetite.

A couple of days went by and I no longer cared or thought about the fact that the painting had disappeared. I had too much things on my mind as the deadline to start class was approaching. Veronica and I started hanging out more and I began to notice how rebellious teenagers in the US would throw parties in empty houses and drink from dusk till sunrise. I had experienced face-first what meant to black out for the very first time in my life when I graduated high school and attended a party out in the boondocks at the cabin of the parents of a friend of a friend of my best friend. It had been a very small town where I graduated high school from… After this life-changing experience I had no idea what would come much later in college, and I can tell you now that if I ever thought that the high school party was crazy, then I hadn’t the slightest clue as to the definition of the word when Veronica started throwing her parties.

“C’mon, have one drink! Just one tiny drink, Cisco. For me, pleaseeeee,” Veronica insisted. This was a few weeks after my realization that the painting had disappeared, but I was a little preoccupied at the moment as Veronica held a bottle of Smirnoff in front of my face. At this point I had never tasted Smirnoff before nor did I ever plan to. I had no idea what it tasted like or that if choosing Green Apple over Red Label made any damn difference. I was also oblivious to the fact that it contained vodka. This was mistake number one. 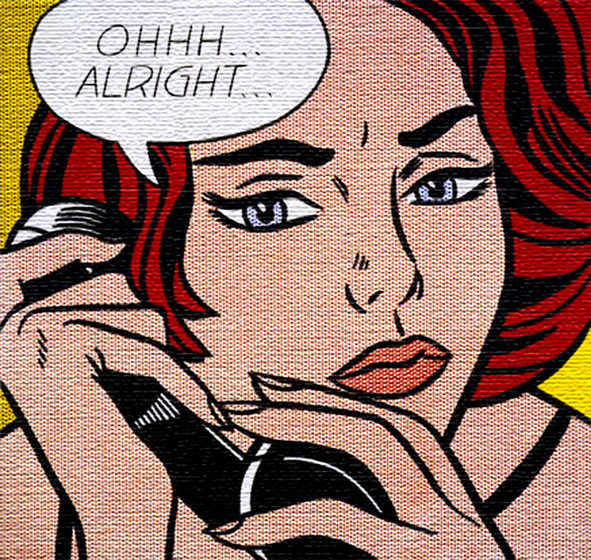 Painted in 1964 using his signature Ben-Day dots, Roy Lichtenstein’s image of a blue-eyed, flame haired beauty illustrates the brash comic styling of the artist’s most celebrated period of artistic production.